Let's dive into the world of American police, as we see in movies and TV series that made it famous in the world. But with a difference, the hero is from Ticino-Switzerland. Christian Romitti, born in 1967, after working for the cantonal police in Ticino from 1989 to 1995, joined the faculty of criminology at California State University, Fullerton, where he graduated in 1999.

In 2001 he moved permanently to California, and now works as a policeman in the city of Orange, fifty miles south of Los Angeles. He became part of theSwat Team, the group of elite intervention, which comes into play when the regular police officers are not enough, as in cases of terrorism, hostage-taking, or the protection of personalities.

We discover its history, and his dangerousjob everyday in this thrilling documentary. 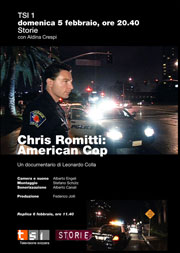