The Repetti brothers sell bail bonds to whoever wants to leave prison while awaiting trial.

Should they jump bail and not appear before the court, they automatically become WANTED.
At this point the brothers take up the role of bounty hunters.

Armed with guns, binoculars and handcuffs, they hunt down fugitives.
If caught, these captured fugitives will also have to pay for expenses.

This fast-paced, straight-to-the-point documentary shows the brothers in their day-to-day work as bondsmen, as well as investigators and hunters of runaways in this dangerous American metropolis. 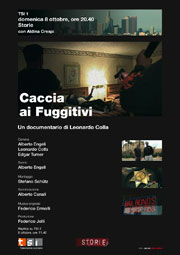