It is a long story for a short lives.
His grandparents had left the Ticino-Switzerland many years ago, emigrated to the United States in search of fortune.

To afford a college education  Regina enters in the Army Reserves: a corp that provides its members educational and economic benefits compared.
Regina finally enlisted as many, and is sent to the front.
She died Dec. 23, 2005, just 25 years, in a bomb attack, the 2365th victim of those American soldiers killed in Iraq.

Behind its serial number and behind the figures and statistics of a terrible war, there is also its history.

The story of a family, with high hopes of a long journey from Val Colla to America.
His family and his friends will tell us his story. But even she, who had gone to Iraq armed with a camera. 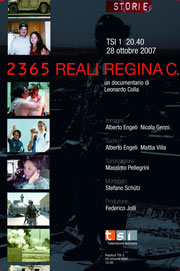